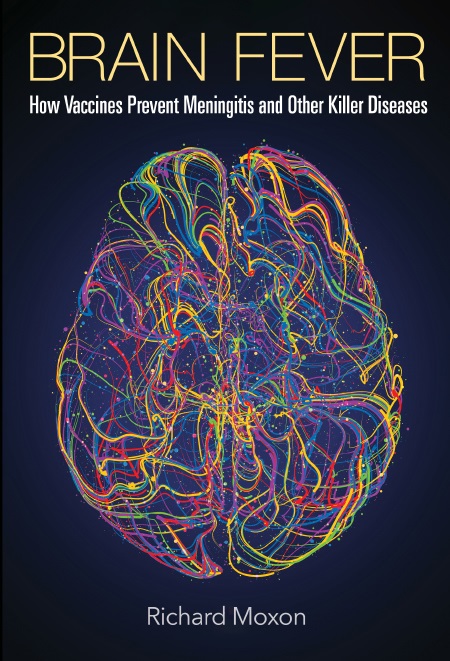 In 'Brain Fever: How Vaccines Prevent Meningitis and Other Killer Diseases' (World Scientific 2021), which is due to be published later this summer, Professor Richard Moxon, Jesus College Emeritus Fellow and Emeritus Professor at the Department of Paediatrics, focuses on the condition that has directed his career and research over the past fifty years; research that has ultimately led to a vaccine that prevents serious illness and saves lives.

The term 'brain fever' was used widely in nineteenth century literature to describe a potentially life-threatening illness of the brain brought about by a severe emotional upset. Flick through the novels of Bram Stoker, Dostoyevsky or Sir Arthur Conan-Doyle and you'll see 'brain fever' applied to characters in various states of nervous exhaustion. However, the popular Victorian phrase more generally applied to serious medical conditions of the brain, such as encephalitis, scarlet fever, cerebritis and meningitis

Meningitis is an infection of the protective membranes that surround the brain and spinal cord (meninges). It can affect anyone, but is most common in babies, young children, teenagers and young adults. If not treated quickly, the infection can become very serious, causing life-threatening blood poisoning (septicaemia) and result in permanent damage to the brain or nerves. As a paediatrician, Richard has been on the front line in terms of providing intensive medical care for children with bacterial meningitis, and witnessed the devastation it causes.

He begins his new book by describing his boyhood dream to study medicine. He traces his career from medical student through to becoming Action Research Professor of Paediatrics at the University of Oxford and founding the now world-famous Oxford Vaccine Group (OVG).  He describes how a combination of clinical practice and laboratory science over several decades was needed to unlock the secrets of the virulent bacteria that cause the deadly disease, and how meningitis vaccines brought about a historical breakthrough in public health.

Richard pursued his medical studies at Cambridge and St Thomas’ Hospital (1960-1966). In 1970, an American colleague persuaded him to apply to be a trainee at Boston Children’s Hospital, part of the Harvard Medical School, an experience that shaped his career. There, he met clinician scientists pursuing ground-breaking research and decided to extend his stay to do research on infectious diseases of children.

In 1974, Richard was recruited to Johns Hopkins Hospital in Baltimore as Assistant Professor. He worked as a clinical infectious diseases specialist while continuing his research on H. influenzae type b (Hib) meningitis. Working in collaboration with Nobel Laureate, Hamilton Smith, Richard was one of the first to apply molecular genetics to infectious diseases and apply it to clinical practice, vaccine development, and public health. In 1979, he became the Head of Paediatric Infectious Diseases Division in the Johns Hopkins Children’s Centre.

Richard and his family moved to Oxford in 1984, where he was appointed Professor and Chair of Paediatrics at the University of Oxford. He was able to share his infectious disease expertise in child health which, at the time, was a non-existent medical specialty in the UK. Continuing his research, he was asked by the late Sir David Weatherall to be one of the founding scientists of the Institute of Molecular Medicine. He also set up the OVG, which is now one of the largest university-based paediatric clinical trials units in the world.

During this time, Richard led UK trials of the Hib meningitis vaccine. In his laboratory, he pioneered the application of genome sequencing into vaccine development, a technology that resulted, through collaboration with US and Italian scientists, in a vaccine against meningococcal meningitis that is now a routine immunisation for infants. There is no doubt that this pioneering work has been responsible for saving thousands of lives globally every year, and preventing even more cases of devastating brain damage. Richard says, "Scientists, especially the medical profession, have a special responsibility — one we have been failing to shoulder adequately for several years — to help people understand the importance of vaccines and why they are so essential for the maintenance of public health. If what is involved in developing a vaccine and how it works are not understood, trust in immunisation is compromised.

As we are learning from the Covid-19 pandemic, it is vaccines that we rely on to fight and overcome the devastation caused by virulent germs. The message is clear: no intervention in the history of medicine has conferred a greater public health benefit than immunisation."

He adds, "It is for this reason that I have written a book that I hope will appeal to all who are curious about what is involved in developing a vaccine: the complexity of the laboratory investigations, the role of universities in supporting medical science, the challenges of obtaining research funding and, inevitably, engagement with politicians. I hope what also comes across is the sense of collaboration involved in such work, and my admiration for the brilliant scientists I have worked with over the past fifty years."

Since his retirement from the Chair of Paediatrics in the Oxford Medical School in 2005, Richard has continued to be involved in vaccine development, working on scientific advisory committees, teaching in international vaccine courses and mentoring young scientists. He has also focused on writing for more general audiences. As well writing 'Brain Fever', Richard also has a blog - MoxForum - which aims to capture a scientific perspective on key research topics, such as the COVID-19 pandemic, that strikes a middle way between esoteric scientific articles and the often over-simplified information gleaned from the media.

For more information on Brain Fever and to order your copy click here.

All royalties from the book will go to support UK Meningitis charities Meningitis Research Foundation and Meningitis Now.

A new paper published this week in Cell Reports reveals that changes in the gene expression of blood stem cells occur across the human lifetime; an important step in the understanding and treatment of blood disorders.

Research led by Carlo Rinaldi and Catheryn Lim discovered that a naturally-occurring isoform of an androgen receptor can be used in therapy for spinal and bulbar muscular atrophy, and shows potential for other diseases.

The Oxford-run VALIDATE Network has received $1.5 million in funding for its tuberculosis vaccine work from the Bill & Melinda Gates Foundation.

The University of Oxford’s and our partners AstraZeneca have today announced that one billion doses of the ChAdOx1 nCov-19 coronavirus vaccine have been released, to more than 170 countries, marking a key milestone as part of the University and AstraZeneca’s joint vision to make the available to the world, on a not-for-profit basis for the world during the pandemic, and in perpetuity for low- and middle-income countries.