On Wednesday 15th June, the Department of Paediatrics invited its members of staff and selected guests to join them at the Oxford University Museum of Natural History to embark on special evening of celebrations, commemoration, and entertainment.

As the guests gathered at the Museum’s gallery, for nibbles and bubbles, Professor Georg Holländer introduced the evening with a witty but warm welcome, capturing the changing times from the last 50 years. 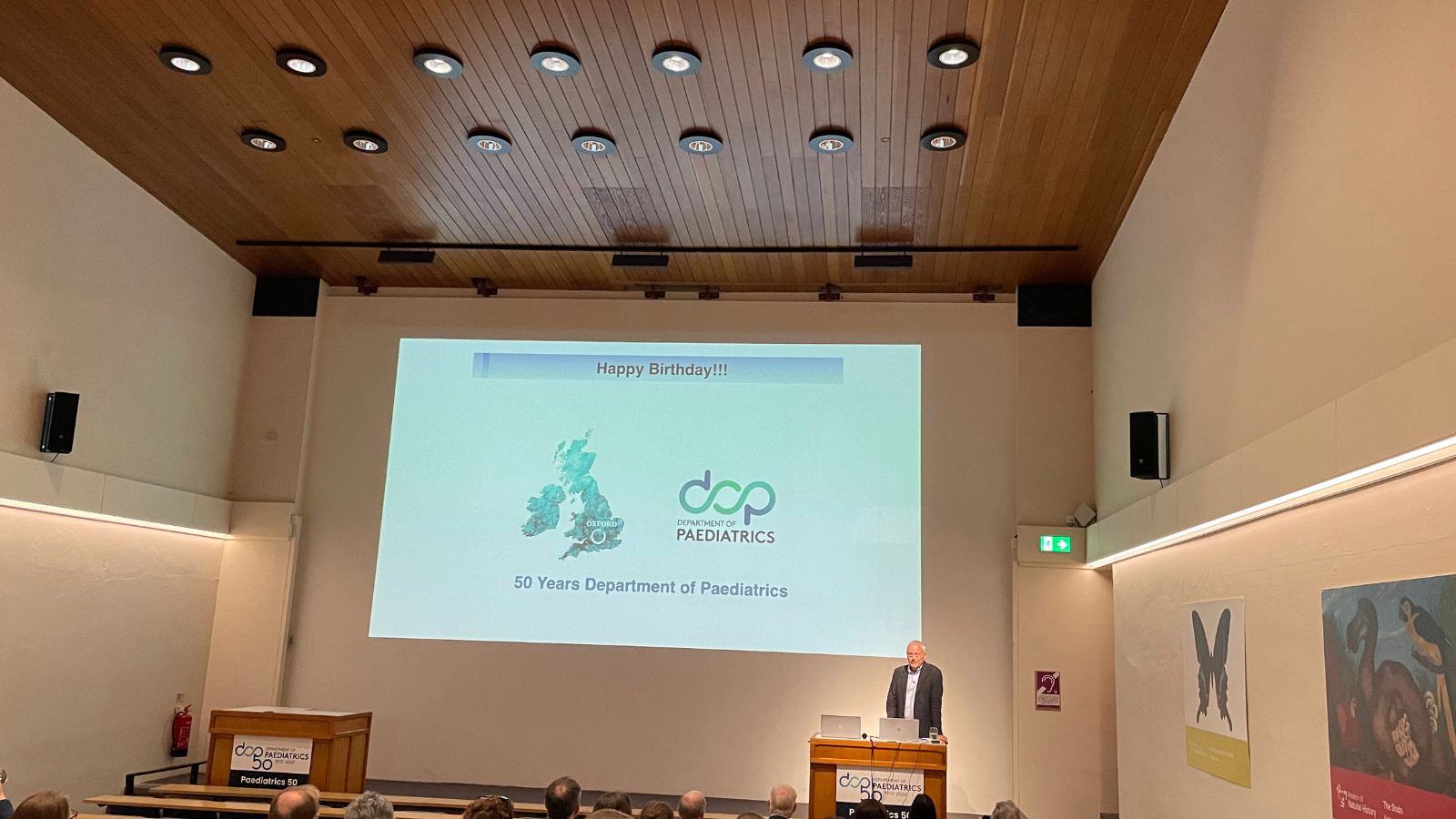 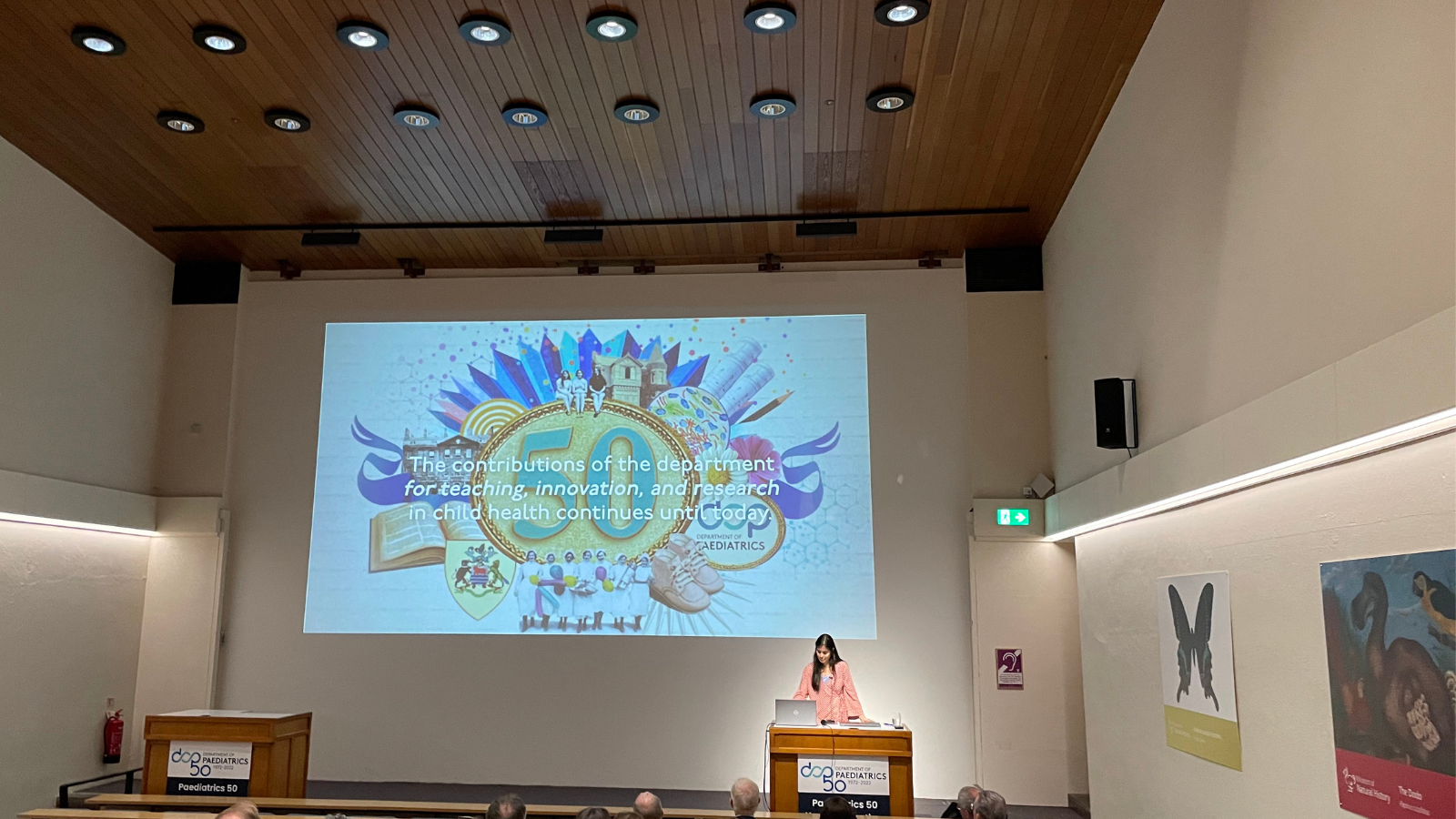 Next, Dr Samantha Vanderslott took the stage, presenting her findings on the Department’s history, dating back to the opening of the first children’s ward at the Radcliffe Infirmary in 1867. First, she charted the early pioneer paediatricians: Dr Cicely Delphine Williams, one of the first female medical students to graduate from Oxford University who identified the protein deficiency disease kwashiorkor in 1929 and Dr Victoria Smallpeice, the first full-time paediatrician at the Churchill Hospital children’s ward in 1947, who with Dr Pamela Davies introduced very early enteral feeding with human milk for preterm babies in 1964. Next, the 1960s and 70s marked many scientific developments in paediatrics. These included the discovery of ‘brown fat’, vital for retaining warmth in newborns (1963, Prof. Sir David Hull and Dr Michael Dawkins), the invention of the ‘Silver Swaddler’ to protect premature babies from heat loss (1968, Prof. David Baum), and the confirmation of human foetus sleep cycles (1972 Prof. Geoffrey Dawes). The opening of the Department of Paediatrics in 1972 was marked by Prof. Sir Peter Tizard becoming the first Professor of Paediatrics at the University of Oxford. Prof. David Baum was also recruited as a lecturer in the new Department and would go on to found Britain’s first children’s hospice ‘Helen House’ with nun Sister Frances in 1982. In 2007, the new West Wing and Children’s Hospital opened at the JR Hospital, with an official opening ceremony by Queen the following year.

The final talks were delivered by two previous Heads of Department, Professor Richard Moxon and Professor Peter Sullivan. Both recalled amusing events from their headship relating to how they came to direct the department and what caught their attention during their tenure.

At the end of this first part of the evening, we enjoyed a view back into the Department’s history, a short chronical of the general events that shaped 1972 and an account of the two emeritus professors who forged the department as we know it today, It was then time to venture out of the lecture hall into the Museum, which had been brought to life with music and blue lighting - illuminating the gothic revival architecture of the building. Lush green Kokedama plants had been manicured and carefully placed at the centre of each dining table creating a truly a beautiful scene. As the guests gazed in admiration at the spectacle Emma and the events team had created, their attention soon focussed on the large interactive screen – mirroring the commissioned art that stood proudly amongst the museum’s artifacts. 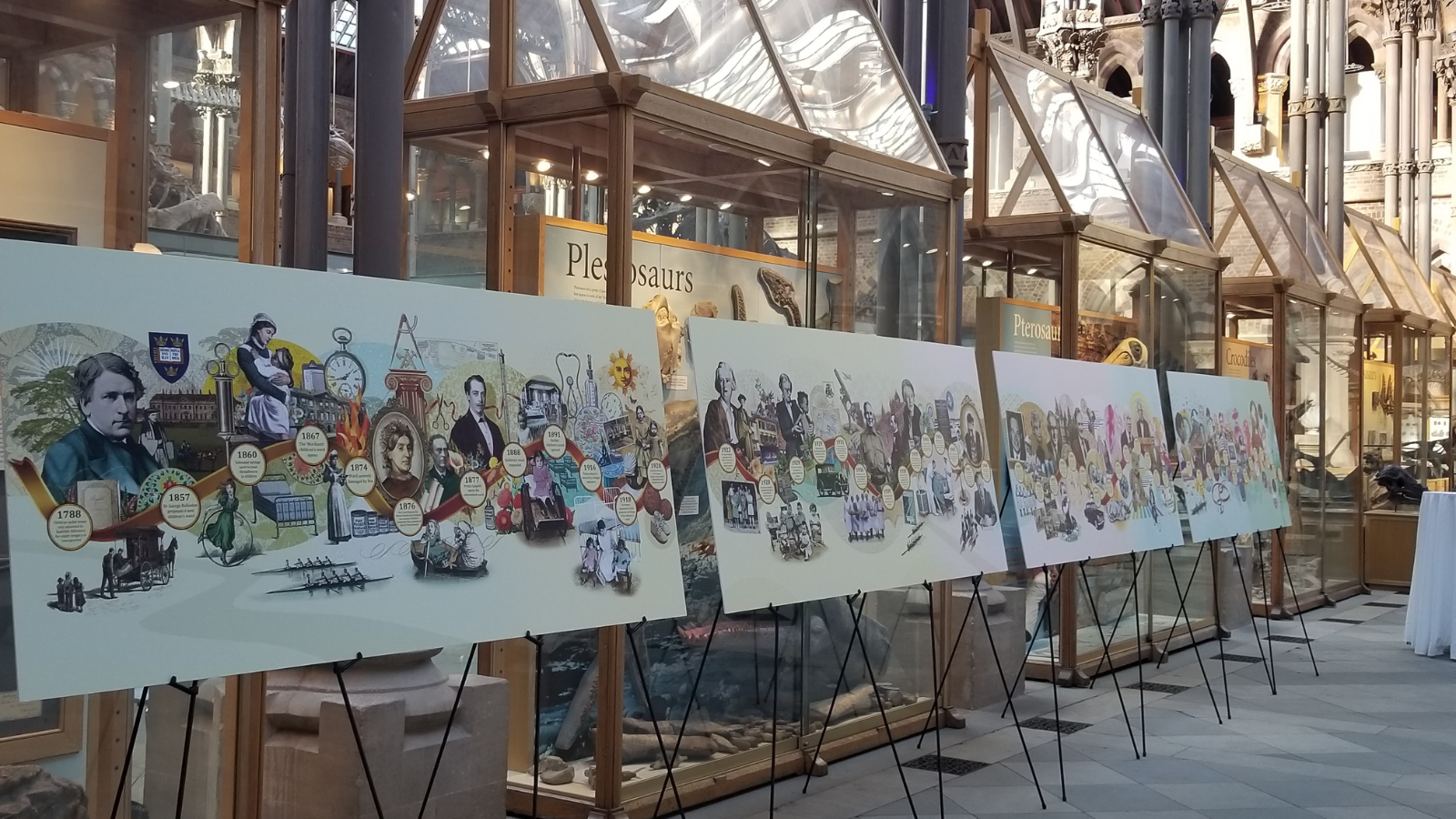 It was now time for the grand unveiling of the Department of Paediatrics timeline, a commissioned piece of artwork aimed to tell the story of the past 50 years. The colourful, complex collage of graphics captures the milestones of Oxford Paediatrics, reflects on the contributions of individual research groups and identifies some of the buildings in which the Department is present. The artist, Martin O’Neill used bold colours, photography, paint and silksreen to tell an exciting story of the years leading up to today. Accompanied by the jazz ban, A Pocket Full of Swing. The impressive display provided an exceptional opportunity to reflect on how far Oxford Paediatrics in general and the University Department in particular had come.

From Georg Holländer, "It is so wonderful to see how an exceptional Oxford history in Paediatrics has lead to 50 years of an outstanding, globally recognised Department of Paediatrics that has a bright future ahead”.

As the champagne flutes were topped up, guests soon spotted the array of costumes & props strategically positioned next to an inviting photobooth. It was not long before sombrero hats were donned, groucho glasses popped on and novelty comical signs were being held up. As dinner was announced, chatter and laughter filled the room as everyone enjoyed a lovely three-course meal.

If you think the Department’s fun stopped there, you are wrong! The events team had a sneaky trick up their sleeve – not a rabbit, close guess though. It was in fact, a mind reader by the name of Looch. He circled the tables, leaving guests bewildered and amazed by his mind-blowing performance of card tricks and mind readings, creating a perfect atmosphere of humour and mystique that provided an incredible touch.

Shaka Obhiozele, Head of Administration and Finance said: “Seeing everyone come together past, present and future to help celebrate the Department’s 50th anniversary was a very special moment indeed. Emma Cheong and the team did an excellent job in organising such a fun, engaging and informative event the memory of which will I’m sure sustain us for another 50 years!”

With no time to waste, the music volume was ramped up and the band “The Brightsparks” took the stage in the southcourt area of the museum. Fantastic floor fillers got the guests grooving to covered tracks like Mr Brightside by The Killers, Go your Own Way by Fleetwood Mac and Never Too Much by Luther Van Dross – to name just a few of the era defining from the last 50 years. The band smashed every hit and it was really the perfect way to end an evening of celebrations and mark the 50th anniversary of the Department.

Thank you to everyone who came and to the entire events team for putting together a fantastic evening that people will remember for years to come. Well done all.